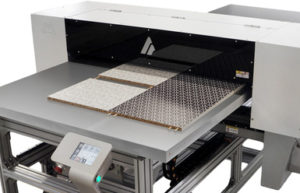 Azon printers that Atlantic will sell cover the textile, direct to garment (DTG), UV flatbed and industrial markets, including the Matrix industrial UV-LED flatbed launched at Fespa last month, which can print onto objects weighing up to 100kg at up to 2,880dpi.

Atlantic managing director Keith Pratt said that he expected the Razor range of small UV flatbeds, which compete with machines such as the Mimaki UJF-3042 and 6042, to prove particularly popular. He acknowledged that compared to equivalent Mimaki, Mutoh and Roland DG machines the Azon name was relatively unknown in the UK, but added that the quality of the machines would break down any barriers. The firm has an extensive UK customer base and knowledge of that market through its service and aftermarket ink businesses.

Azon is currently manufacturing the machines that will be installed at Atlantic’s demo centre in Harlow, Essex, which are expected to be installed by early July.

The firm has also revealed that it will extend its deal with Ricoh to sell the its DTG machines, which were launched at Fespa, in addition to its wide-format latex printers.

“The addition of these new products gives us a range of machines that address unique market spaces,” said Pratt. “I’m very excited.